In this lab, you will build and terminate an Ethernet crossover cable and test it by connecting two PCs together and pinging between them. You will first analyze the Telecommunications Industry Association/Electronic Industries Association (TIA/EIA) 568-A and 568-B standards and how they apply to Ethernet cables. You will then construct an Ethernet crossover cable and test it. Finally, you will use the cable you just constructed to connect two PCs together and test it by pinging between them.

Note: With autosensing capabilities available on many devices, such as the Cisco 1941 Integrated Services Router (ISR), you may see straight-through cables connecting like devices.

Answers Note: This lab can be quite challenging for some students. Many RJ-45 connectors may be used before a successful cable is built. If resources are limited, you may wish to have two students build one cable instead of having each student construct one individually.

With a crossover cable, the second and third pairs on the RJ-45 connector at one end of the cable are reversed at the other end, which reverses the send and receive pairs. The cable pinouts are the 568-A standard on one end and the 568-B standard on the other end. Crossover cables are normally used to connect hubs to hubs or switches to switches, but they can also be used to directly connect two hosts to create a simple network.

Note: With modern networking devices, a straight-through cable can often be used even when connecting like devices because of their autosensing feature. With autosensing, the interfaces detect whether the send and receive circuit pairs are correctly connected. If they are not, the interfaces reverse one end of the connection. Autosensing also alters the speed of the interfaces to match the slowest one. For example, if connecting a Gigabit Ethernet (1000 Mb/s) router interface to a Fast Ethernet (100 Mb/s) switch interface, the connection uses Fast Ethernet.

The Cisco 2960 switch has autosensing turned on, by default; therefore, connecting two 2960 switches together works with either a crossover or a straight-through cable. With some older switches, this is not the case and a crossover cable must be used.

In addition, the Cisco 1941 router Gigabit Ethernet interfaces are autosensing and a straight-through cable may be used to connect a PC directly to the router interface (bypassing the switch). With some older routers, this is not the case and a crossover cable must be used.

When directly connecting two hosts, it is generally advisable to use a crossover cable.

Step 1: Analyze diagrams and tables for the TIA/EIA 568-A standard Ethernet cable.

The following table and diagrams display the color scheme and pinouts, as well as the function of the four pairs of wires used for the 568-A standard.

The following diagrams display how the wire color and pinouts align with an RJ-45 jack for the 568-A standard. 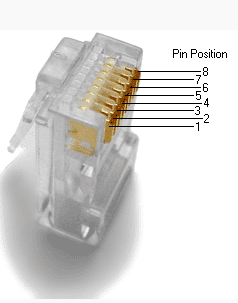 Step 2: Analyze diagrams and tables for the TIA/EIA 568-B standard Ethernet cable.

The following table and diagram display the color scheme and pinouts for the 568-B standard. 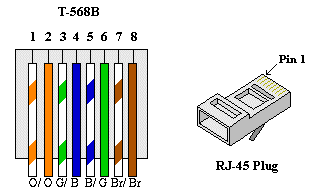 A crossover cable has the second and third pairs on the RJ-45 connector at one end, reversed at the other end (refer to the table in Part 1, Step 2). The cable pinouts are the 568-A standard on one end and the 568-B standard on the other end. The two following diagrams illustrate this concept. 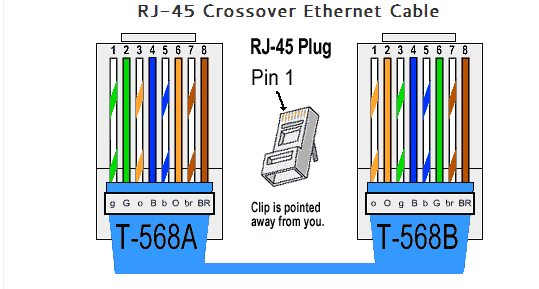 Repeat steps 1a to 1g using the 568-B color wiring scheme for the other end.

If your Answers has a cable tester, test the crossover cable for functionality. If it fails, check with your Answers first as to whether you should re-cable the ends and re-test.